Young Woman in the Garden

Having been unable to locate this painting or consequently to see it, we will, temporarily,  only attribute it to Frédéric Bazille. Nevertheless, the case seems sufficiently interesting to us to point it out and report on it here. Several elements allow us to propose this attribution: these are the drawings that are part of the Orsay Museum albums kept in the Département des Arts graphiques in the Louvre Museum. The first, the least accomplished, Study of a Woman and Mouse; the second, Ophelia.

Between the first and second drawings, Bazille has given shape to his idea. The second one is more precise because, through the framing, it clearly shows that he wanted to make a painting of it. We know that in some preparatory drawings he uses the same idea of framing.

The second, more accomplished drawing thus shows this young woman, and many of the details bring it closer to the painting: the identical movement of the body, the near-similarity of the position of the arms, the long dress whose right end drags on the ground. The folds that rise up give a glimpse of the movement of the legs. In the drawing, we can see the feet of the woman that Bazille finally decided to uncover in the painting. The left arm lifts the dress, giving it shape and folds which, in the drawing, are characterized by a black, continuous and strong line. In her left hand, the young woman holds a bouquet of flowers, which, in the preparatory drawing, Bazille rendered with crosshatching, as he also does for the vegetation at the young woman's feet.

The movement of the woman is each time rendered and marked by a belt. Characteristic again is the way Bazille treated the girl's bust, leaving her right breast visible, a breast emphasized by the movement of the dress. It is in the first preparatory drawing Study of a Woman and Mouse that the movement of the dress, which starts from the left shoulder and leaves the breast apparent, is most marked. As for the right arm, it is higher in the painting but its movement, its curvature, are perfectly similar to those in the drawing. The cap also confirms Bazille's perseverance in choosing his subject. The bonnet covers the head and forehead and, in each case, comes down along the left shoulder almost to the waist. In the drawing, Bazille has marked the existence of the drapery, to the right and left of the young woman, with a few more pencil strokes, which makes it possible to already guess its shape.

The woman is similar to the Woman in a Moorish Costume, who also lets her right breast show through the silky, transparent fabric of her dress. And, as in other paintings, she has closed meditative eyes.

The colors, in their fluidity, are inevitably reminiscent of the Young Woman with Lowered Eyes: same skin tone, identical green and pink, from the same palette.

The subject matter by itself may appear surprising, but it is worth remembering that Bazille takes up the same themes in two drawings Study of a Woman Cutting Flowers and Woman in a Garden. 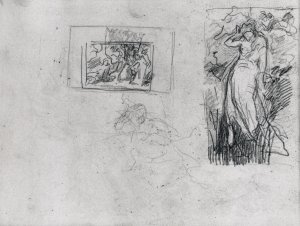