This Young Fisherman is a sketch Bazille made during his last vacation  at Méric in the Summer of 1870.

A young boy, barely a teenager, holds a fishing rod in his right hand. According to the family tradition, this would be Louis Auriol, son of the farmer working at Saint-Sauveur estate at Lattès. Wearing a sort of cap, he is dressed in a large white shirt, tight at the neck and wrists, and brown pants, loose and comfortable. He is depicted in profile, probably looking down at his fishing line. His left arm hangs down by his body.

Bazille hardly pushed the drawing toward perfection, any more than he did the preparatory drawing Study for a Young Fisherman. In the latter, the young boy is shown in the same position, the left hand, however, at the height of the belt. Also shown is the fisherman's line, a line that, unlike in the painting, appears here in full.

We note several graphic imperfections in the painting. The left hand, for example, is simply sketched and, the right one deformed. The boy's head is also a bit large, disproportionate to his teenage body, as is the head of the Young Male Nude Lying.

In fact, what makes the quality of this painting is the burst of light: the white of the shirt standing out against the azure sky and the greens and browns applied in vigorous, jerky strokes. "Finally, Bazille begins his last painting, which he covers with multiple brushstrokes, thanks to which the sky powders, the foliage gleams, writes Poulain. It is with this call to impressionism that his work ends" [Poulain, 1932, pp. 181-182]. We cannot affirm, as he does, that the Young Fisherman is Bazille's last work, but it is true that it opens the way to Impressionism. This will make Poulain say again that "it is he who, more realistic than Courbet, a landed romantic, more human than Manet, a contemptor of his own doctrine, innovates, while maintaining the persistent measure of his style" [Poulain, 1932, pp. 181-182].

Bazille seems to have used a blank canvas. He began by giving some indications in pencil and then camped out his character before doing the landscape. We have evidence of this with the end of the line that is covered by the tree on the left of the painting. He then gave the masses their reality: the sky, the trees and the river.

In a few months, Bazille executed and succeeded in several canvases of very different inspirations: from the various Flowers to his paintings entitled Young Woman with Peonies, the Young Fisherman, The Studio on the rue La Condamine to Ruth and Booz, he proves his eclecticism and sometimes his perfection. Never before has he given his work such a dimension. 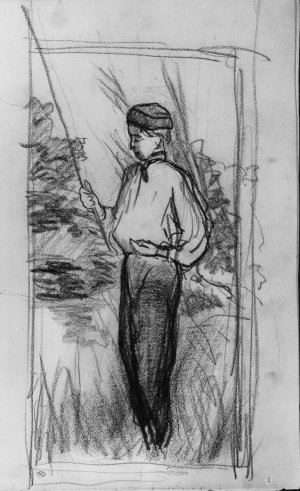