At the time of his floral compositions of the 1870s in which he inserts a black woman arranging flowers in his two famous Young Woman with Peonies and Young Woman with Peonies [Previously Négresse aux pivoines] now in the Fabre Museum in Montpellier and the National Gallery in Washington, Bazille turns here to another subject where he presents the same model, probably playing a loutar or lotar, an instrument widespread in the Greek and Arab world, whose affiliation to our lute is more than likely. We know Bazille's passion for flowers that seduce him every summer in the greenhouse at Méric, as we follow, through his correspondence, his undeniable attraction for music. To be admitted by the art world, did he not present the Young Woman Playing the Piano at the Salon of 1866, of which he spoke several times in his letters to his parents, and which was refused? We then lose its track, only to find it again in 2016 - thanks to X-rays - under the Ruth and Booz of the Fabre Museum! But isn't the music here just a pretext? Would our painting have the same flavor with another character? Probably not, because everything that makes the attraction, the charm and the sweetness of the painting rests on the choice of the model.

As with the two paintings Young Woman with Peonies in the Fabre Museum i, Montpellier, the National Gallery, Washington, and for the gouache in the Fitzwilliam Museum, Cambridge, the originality of the work thus lies in this black woman whose powerful hands tenderly caress the strings of her instrument. Hands that bear a striking resemblance to those of the model in the two paintings Young Woman with Peonies in Montpellier, Washington and with the Cambridge gouache. As for the resemblance to the black maid in La Toilette, it is not to be dismissed though less obvious. And even if we find in Bazille's correspondence allusions to a "too expensive" model, in the 2016-2017 exhibition catalogue, Jones also proposes a connection with Aspasie by Delacroix, which Bazille would have seen at the time in the Fabre Museum. Hypothesis to be legitimately taken into consideration. Just as it should be noted that the maid in La Toilette is only seen in profile, which conceals her face quite a bit, not to mention the artist's margin of interpretation. As far as the models were concerned, the matter seemed settled, then, as their similarity was established although, in our painting, the woman expresses a deep longing absent elsewhere.

The question of the model was to come out with the discovery of this same model in Samson and Delilah by Paul Rouffio acquired by the Musée des Beaux-Arts de Marseille in 1874, presumably after the Salon held in the same year. The resemblance between our Bazille model and the black model on the right of Rouffio's painting is striking and obvious. We will not go into the biblical and/or ancient theme of the painting, which is not our purpose here. On the other hand, we know that Rouffio, who became a member of the Société des artistes français in 1869, lived in Paris at that time, that he had his studio at 35 boulevard Rochechouard. We also know that there were links between the two families, which would explain this pictorial connection. The second discovery - no less interesting - concerns the painting by Thomas Eakins Female Model in the De Young Museum, Fine Arts Museums in San Francisco where Eakins uses a black model that tends to be close to the other one with some differences however. One will not be surprised at Eakins' interest in these models. We can assume that he may have crossed paths with Bazille since he stayed in Paris from 1866 to 1869 before returning to the United States. There is thus a convergence of dates, places and subjects at least between Bazille and Rouffio who use the same model. The family and religious ties of the Protestant high society then extended not only in the Montpellier region but also throughout Europe.

Thus, the Bazille, Westphal, Leenhardt, Tissié, Castelnau, Vialars, Cazalis, Layrargues, Planchon families knew, frequented, and appreciated each other... united by the same community of values through religion but also economics, politics, culture, social life and even associations up to leisure activities such as hunting, of which Gaston Bazille and his son Frédéric were followers. This is how André Gide describes it in Si le grain ne meurt: "There were Westphal, Bazille, Leenhardt, Castelnau, relatives of each other". In her thesis Michel-Maximilien Leenhardt: l'œuvre, reflet d'un milieu [Université de Toulouse le Mirail, 2019], Isabelle Laborie properly describes this multi-cultural and intertwined milieu based on powerful family ties. She also points out that, for many events, this world met in the properties at Méric, Bionne, Fontfroide, Saint-Sauveur, le Mazet as well as at the Villa Louise, all within a stone's throw of Montpellier.

To learn more about the family connections of the Bazilles, Vialars and other cousins, we highly recommend the genealogy website by Patricia Pagézy-Wiriath, a descendant of Camille des Hours. Likewise, the genealogy of the Bazille and Westphal families [Westphal family document]. We are particularly grateful to them for the information we have drawn from them about these families.

With regard to technique and color, Bazille plays on their opposites here. On the right, the almost pearly whites are reminiscent of those in The Improvised Field Hospital, which contrast with the crimson red on the left side of the painting. Finally, as in The Fortune Teller Bazille divides the background of the painting in two to reinforce these same contrasts. It is here that Bazille's entire palette is expressed and revealed. As Jones says, Bazille "mentions neither of these works explicitly in his correspondence" [Exhibition catalogue Montpellier, Paris, Washington, 2016-2017, p. 176]. She also points out Bazille's silence, not only on the flowers but also on the black woman who is ultimately the main theme of the paintings in question. And she wonders if Bazille was aware of this "provocative terminology...and the racist stereotypes attached to it" [Jones, p. 181]. Most certainly not. In view of these projections, we will not really be surprised by the painter's silence on a subject whose impact it would obviously have later, especially today.

We will pause for a moment to consider what the 2016-2017 Bazille exhibition catalogue entitled: "Practice and Process in the Work of Frédéric Bazille", a chapter that underlines that "Bazille himself provided very little concrete information about his working methods and the materials he used" [Jones, p. 151]. Of note is the thinness of the canvas in the two paintings Young Woman with Peonies in Montpellier and Washington, which "allows for [a] high quality of finish" [Jones, p. 152]. This is the case with our painting executed on a fine canvas that is consistent with Bazille's pictorial practices.

All of the analysis by the Art Analysis Laboratory confirm that the materials of our painting were used in the nineteenth century, the report based on the multipectral camera of New Lumiere Technology TWP - further emphasizing that the same technical characteristics are found in the analysis of Bazille's paintings made by the Louvre's C2RMF on the occasion of the 2016-2017 exhibition. "One cannot reproach Bazille for his lack of delicacy nor for a mistaken vision of reality", we wrote in our 1995 catalogue raisonné [Schulman, p. 211]. Terms that apply more than ever to this painting, which a branch of the family has preserved to this day and which adds to the corpus currently known of the artist.

In her correspondence, Bazille makes no reference to paintings bearing this theme. In fact, he is silent as regards them and, if we make calculations correctly, many of his works - even important ones - escape his letters. This leads us to look at Bazille's corpus differently. 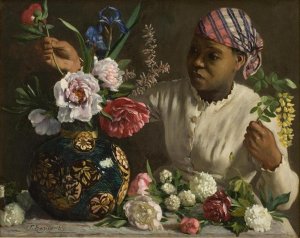 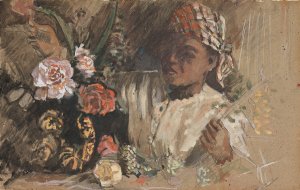