In a letter of early December 1864, Bazille wrote to his mother: "We went with my old friend Villa to visit again a studio that we are to occupy on January 15; it still suits us very well, the owner has promised to have it repainted and has granted us a small garden as big as the dining room of the house, which contains a peach tree and some lilacs; it will be very pleasant for us in the Summer to paint people in the sun". It was indeed at this time that Bazille executed his paintings of nude women in a natural setting: the Naked Woman from Behind seated on a rock near a pond or small river is the first of its kind. In contrast, the Reclining Nude appears to have been painted in the studio, with the model lying on a rug. One may rightly wonder where our painting was painted. We notice that Bazille first wanted to underline the contours by outlining them with a strong line, but also the shapes by the game of light. Does he not speak in his letter of December 1864 of making " people in the sun"? In the end, it does not matter whether the subject was painted in the open air or in the studio; the essential thing is Bazille's feeling and expression of maturity. He would later return to female themes, notably in La Toilette where the influence of Delacroix and Manet is apparent. A completely different vision, however, of the pictorial aesthetics expressed in his early days. 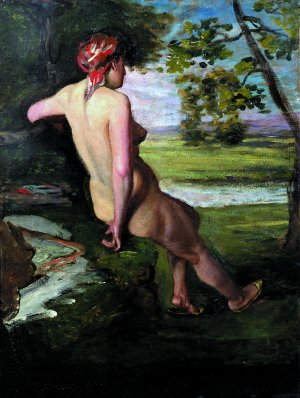