Fisherman with a Net

The Fisherman with a Net is a new theme since, previously, Bazille had treated only female nudes in his paintings. It was during the Summer of 1868 that he executed this unexpectedly large painting in which a naked man, from behind, head turned to the right, in profile, throws a net. In the background, another man, also naked, is sitting in the grass. At the end of the field, planted with tall, dense trees, we can see, between two clumps of trees, the Lez River, with its waters lit by a beam of sunlight. In the background on the left, roofs of houses that are probably those of the village of Castelnau.

With this painting of a male nude, Bazille takes up a theme given up since David and Géricault. The fisherman is the center of the subject. According to Sarraute, this is a "Savoyard whom Marc Bazille knew", the artist's brother. This man with moustache, with broad and powerful shoulders, is casting a net weighted with lead, which explains the extent of his movement, reinforced by the position of his legs and feet, which are looking for their footing. The movement, difficult to paint, is nevertheless well rendered. Only the left foot is not really planted in the grass as it should be. The second character is less finished. Even though this is a secondary character, Bazille wanted to show his virile movement by giving him broad shoulders and a powerful neck.

The Fisherman with a Net, which Claparède describes as an "uneven canvas" [Letter from Jean Claparède to Germain Bazin, June 3, 1960], is the subject of a long development by Gaston Poulain: "The first canvas that Frédéric executed that summer has only the value of an experiment with heterogeneous qualities... The nude which is drawn there is of a tone too uniform for us to believe in the immediate vicinity of water, sun and colored masses such as grass and foliage... This man poses too much, because his gesture is not at all related to the maintenance of the body... his anatomy is far from being satisfactory... The head is, on the other hand, young and very beautiful, and the background landscape absolutely exquisite, with its receding row of bluish poplars, with its clear stream flowing behind the flickering scenery of the foliage, camped in the manner of Monet in the Déjeuner sur l'herbe, around trees with ringed trunks, of opposite work and spirit, these absolutely prerogative of Bazille. The Fisherman with a Net must be considered not as the work of a maturity, but as an indispensable and fruitful essay" [Poulain, 1932, pp. 122-123].

It cannot be said with Poulain's certainty that the Fisherman with a Net precedes the View of the Village. These are two paintings that Bazille did at the same time but one does not necessarily foreshadow the other.

The central figure in the painting is not placed directly under the sun beams; this explains the general tone of his skin, which seems to surprise Poulain and which, indeed, is not related to "the scorching heat" of which he speaks. The fisherman is under the trees which, only in places, let some beams filter through. The modelling of the skin gives an exact idea of the muscles of the character. Fortunately, Poulain does not see only incongruities and his compliments on the color harmonies are fully justified. Certainly one can, as Marandel does, discern a certain eclecticism in this painting whose technique is close to that of Sisley in his Marlotte period around 1866. What is striking are the broad, vigorous strokes of the small green trees near the houses and the foliage technique that is that of L'Allée de châtaigniers à la Celle-Saint-Cloud [Paris, Petit-Palais, 1865]. In the foreground is the technique of the Fontainebleau landscapes and the View of the Village that Bazille painted at the same time.

The Fisherman with a Net actually foreshadows the Summer Scene; it also does Cézanne's nudes and bathers. Clearly, Bazille is again seeking here to insert a character into a landscape, an idea that has pursued him from the beginning.

The painting appears above the staircase in The Studio on the rue La Condamine. Bazille presented it at the 1869 Salon where it was refused. There is a preparatory drawing: Study for the Fisherman with a Net. Perhaps Sarraute is correct in thinking that another preparatory drawing, Study for the Summer Scene, in which the fisherman far left assumes an almost identical position, was also intended for this painting?

The theme of fishing was common in the nineteenth century. It is assumed that Le Travail or Le Repos by Puvis de Chavannes [Amiens Museum] served as inspiration for Bazille's painting. Suzanne Valadon herself was probably inspired by The Fisherman with a Net to make Les Lanceurs de filets [Paris, National Museum of Modern Art, 1914].

One cannot avoid seeing in this male nude an ode to Rome and Athens and the beauty that the many sculptors expressed in "forging" these perfect bodies. Perrin does not hesitate to write that "the painter, no doubt, expresses here a particular sensitivity to the beauty of the male body" [P. 243]. Should we see here a response to his amorous procrastinations? Maybe can we find some whispering answer in his letters.

Returning to Paris in mid-November, Bazille reaped the compliments of his friends for this unexpected nude. Rejected by the Salon jury, the Fisherman with a Net will be hung to decorate the walls of his studio on the rue La Condamine, which we will see his painting above the staircase.

The Fisherman with a Net is certainly one of Bazille's most beautiful works whose enigma will probably never be solved. 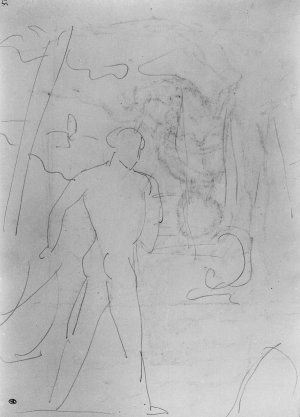