This magnificent and highly probable portrait of Renoir bears striking similarities to the one in the Orsay Museum. Indeed, it is enough to compare the two faces represented in order to note their close resemblance: in both, the same thin nose, the same moustache and beard - which, by the way, also characterize Renoir as painted by Fantin-Latour in Un Atelier aux Batignolles. Moreover, in both, Renoir wears the same artist's jacket and the same blue tie that, here, illuminates the painting. In these distinguishing features, the present portrait bears a close kinship with the Orsay's as well through its aesthetic and technical aspects.

Here, Bazille places Renoir as he liked to pose his subjects: in three-quarter view, with eyes gazing sideways. This is what he did for the Orsay Renoir, as he did and will do for himself in Frédéric Bazille with a Palette, Self-Portrait with a Detachable Collar and Self-Portrait in Shirt Sleeves.

This portrait is also similar to the Orsay painting in technique. In both, Bazille uses black lines, with the same goal here as there, which is to delineate the bust, to make it stand out against the background. His work certainly offers other examples of this process, but nowhere did he use it as systematically as in these two cases. It should be added that the same energetic and vigorous touch characterizes both works, a touch that is applied in both with force to the white collar as well as to the man's ear, which is also strongly underlined. In the portrait presented here, Renoir is seated on a pink sofa, posing in an interior that could be Bazille's studio on rue Visconti. The background is treated extensively, as it is in the Portrait of Renoir in the Orsay Museum, as well as in Frédéric Bazille in Shirt Sleeves and, to some extent, in the Portrait of Alphonse Tissié in a Cavalryman's Uniform.

Finally, the use of colors in this painting suggests, too, some of the most significant connections to other works. We find the same green tones-joined with a somewhat similar layout-in The Fortune Teller, and the same bluish grays in the Portrait of Alphonse Tissié in a Cavalryman's Uniform with, in this instance, the same manner of imbuing the model with importance by refraining, purposefully, from finishing the lower part of the painting: in both cases it is an artifice intended to put Renoir in relief.

This portrait is certainly one of Bazille's most endearing. By its spontaneity and technical audacity it offers proof that the artist was then on a path that would have carried him to the top, if his life had not ended prematurely.

This work should also be seen together with the Portrait of Verlaine. They are comparable both in the boldness of the treatment and in the intimate spirit they embody. These portraits are, in our opinion, among Bazille's most beautiful and avant-gardist. With these two portraits, a new vision emerges of Bazille and his work. 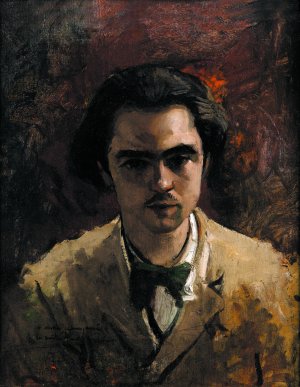