It took nearly 150 years to rediscover this Portrait of Verlaine painted by Bazille in 1867. Dedicated to his friend Verlaine, this painting had long carried the false signature "Gustave Courbet", an authorship that was never acknowledged. It was by chance of a cleaning that the signature and the date "F. Bazille 1867" appeared.

For the sake of art history, it is necessary to recall that another painting had been authenticated as Bazille under the name Portrait of Verlaine as a Troubadour purchased by the Dallas Museum in 1978. A painting whose authorship and subject were then confirmed by Marandel on the occasion of the Bazille retrospective in Chicago in 1978 and by François Daulte at the Bazille exhibition at the Fabre Museum in 1992, and again confirmed by the latter in the re-edition of his 1952 thesis Bazille and his time.

But this story was eventually to redistribute the cards. Several pieces of data corroborate this new attribution. First, there is the date 1867, which corresponds perfectly to Verlaine at 23. The existence of this painting was also known from the inventory he sent to his mother in 1871 before moving to Belgium. Thus the list of paintings includes "une peinture de moi (huile) par Frédéric Bazille". His mother was to keep it until she died on January 21, 1889.

We then lose track of it precisely. It sometimes appears in certain European collections, but it is only recently that it showed up on the occasion of a cleaning that made the Gustave Courbet signature disappear and thus revealed that of F. Bazille.

The photos we know of Verlaine at this time give us the image of a relatively old, bearded and partially bald person. However, Jules Péaron made a "portrait-charge" of him at the age of 23 as he appears in our picture, with disheveled hair and wearing a moustache plug. This was to appear in La Plume on February 1896.

This Portrait of Verlaine, the discovery of which marks a milestone in Bazille's work, is in the same vein as the Portrait of Renoir in terms of its craftsmanship, boldness, and wit. These discoveries allow us to take a fresh look at Bazille's work and reevaluate our previous knowledge of it. 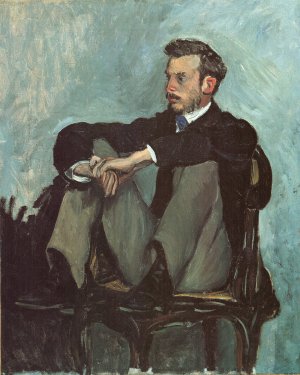 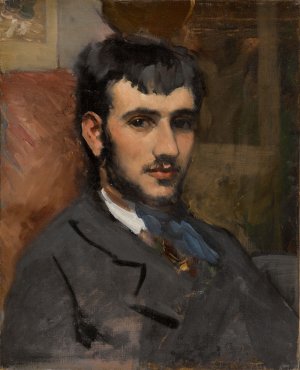